You played them yourself!
Share them with a new generation.

HOYLE® presents the most awesome card game collection ever for kids ages 3 and up! Featuring fresh and colorful graphics, each game makes teaching different sets of learning skills fun for everyone.

Remember the fun when you played some of these games as a kid? Now you can share that experience with a new generation, creating a bond that will live on. The 6-In-1 Fun Pack from HOYLE® is designed with a bright, fresh look that’s destined to make the collection a classic. These games are more than just fun, because they teach valuable and priceless learning skills. Even adults and older siblings will enjoy playing! 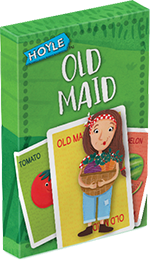 Skills learned: 1) Making Pairs 2) Taking Turns
Don’t get stuck with the Old Maid at the end of the game! This update of the timeless classic uses fruit and vegetable cards to make pairs. Skills learned: 1) Number Recognition 2) Planets
HOYLE® puts a fresh, educational twist on a long-time favorite by using planets on the 1 through 8 cards, beginning with Mercury as number 1 through Neptune as number 8. Skills learned: 1) Number Values 2) Counting
The fun of making “books” of four-of-a-kind by asking the other players for cards has made Go Fish a hit for generations. HOYLE®‘s colorful fish cards add to the appeal. 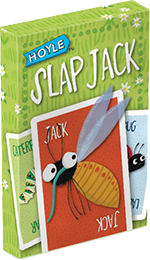 Skills learned: 1) Paying Attention 2) Reflexes
Colorful insect cards amp up the fun in this fast-paced game. Players must slap a pesky mosquito named Jack whenever his card is placed in the center pile. 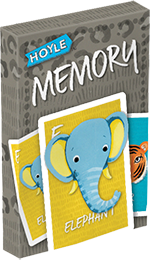 Skills learned: 1) Recall 2) Animal Identification
With all the cards laid face down in a pattern, each player turns over two cards per turn looking for a match. By using animal cards, kids also learn their names. OBJECTIVE
To avoid being caught with the Old Maid at the end of the game!

HOW TO PLAY
One player is chosen to deal. The dealer shuffles the deck and deals out the entire deck, one card at a time. The cards do not need to come out even. Players hold on to the cards in their hand. There are two cards of every image: 2 pumpkins, 2 beets, 2 tomatoes and so on. Players make pairs with the cards in their hands and place them face up on the table. Next, the player to the left of the dealer draws a single card from the dealer’s hand. If it matches one of the cards in his or her hand, the pair is placed on the table. The player then offers his hand to the next player on the left and so on.

Play continues until all the pairs are matched and discarded. One player will be left with the single “Old Maid” card and this player is now the “Old Maid” and the loser of the game!

OBJECTIVE
To score the fewest points possible by getting rid of your cards. At the end of each hand, any cards that players hold are counted as points against them.

HOW TO PLAY
One player is chosen to deal. The dealer shuffles the cards and deals 5 cards to every player to hold as their hand. The remainder of the deck is placed face down in the center of the play area. Dealer turns up the top card of this pile and places it face up next to the deck. This starts the face up pile. Player to dealer’s left plays first. You must play a card from your hand that matches the top card of the face up pile either by rank or by suit.

For example, if the top card is the 3 of spades, then you may play any 3 or any spade. All 8’s are wild and may be played at any time. If you play an 8, you may name your choice of suit. The next player must play a card of the suit named or another 8 card. If you do not have a card to play, you must draw from the face down deck until you can play a card. If you take the last card and still cannot play, you must pass your turn. Play continues to the left until one player runs out of cards or no one can play another card. Player who starts a round always deals the next round.

SCORING
At the end of each round, every player totals the points remaining in their hands. An 8 scores 20 points and all other cards are face value. For example, a 2 card is scored as 2 points. Scores are totaled after each round until someone goes over 50 points, the game ends and the player with the lowest score wins!

OBJECTIVE
To make the most books of four cards. Deck contains 32 cards with 8 different images.

HOW TO PLAY
One player is chosen to deal. The dealer shuffles the cards and deals 5 to every player to hold as their hands. The dealer places the rest of the deck face down in the center of the play area. This is now the “Fish” pile. Player to the dealer’s left goes first. The player will look at his or her cards then ask another player, by name, for all their cards of a particular number. The player must have at least one of this card in his hand.

For example: you have a number “4” card in your hand so you ask another player for all of their number “4” cards. That player must give you all the matching cards they have. Your turn continues as long as you receive the cards requested. If the player you ask does not have any of the cards asked for, they will say “GO FISH!” You must then draw from the Fish pile. The person to your left goes next and asks for a card to match a card in their hand. When a player collects all four matching cards, they are shown to the other players and placed face down in front of them. This is one “book.” If a player runs out of cards during the game, they can draw one card from the Fish pile. The game ends when the last card from the Fish pile is drawn.

SCORING
Players COUNT their “books” and the player with the most “books” wins the game!

OBJECTIVE
Win all the cards in the deck.

HOW TO PLAY
One player shuffles the cards and deals out the entire deck, one at a time, so each player has a pile of face down cards. With 3 players, the dealer will have one less card than the other players. Play begins with the player to the dealer’s left and continues quickly clockwise. Every player, in turn, takes the top card from their pile and without looking at it, places it face up in the center of the play area. The Mosquito’s name is “Jack”. Whenever the Mosquito appears in the center, every player tries to slap their hand first over the Jack card. rom the Fish pile. The game ends when the last card from the Fish pile is drawn. The first player to slap the Jack card wins all the cards in the center. If you win, you take the cards, shuffle them, and place them face down at the bottom of the pile. After this, play continues where it left off.

PENALTY
If you slap a card other than the Jack, you must put the top card from your pile in the middle of the pile belonging to the player who played the card you slapped.

OUT OF THE GAME
If any player runs out of cards, they are given one last chance to get back in the game. If they are the first to slap the very next Jack turned up by another player, they win those cards and are back in the game. Otherwise, they are permanently out of the game.

OBJECTIVE
To match images on the face cards to create the most pairs of cards. The deck contains 32 cards with 16 different animal images.

HOW TO PLAY
Any player shuffles the cards and lays ALL the cards face down so no two cards touch or overlap corners. The cards may be placed face down in rows or in a random pattern. The first player may be decided in any way. Each player must turn up any two cards leaving the first card face up until he or she has turned the second card up. If the two cards form a pair, the player takes them, placing them face down in a stack away from the other cards. This player then gets another chance to turn two cards over to find a match. If the two cards turned over do not match, they are returned to face down position in exactly the same places. The next player then gets a turn to find the matching cards by first turning one over and then another.

The player who finds the most pairs wins the game!

HOW TO PLAY
Deal 3 cards to each player. The remaining cards are placed face down in the center of the table to become the stock. Play begins with the dealer. He or she draws a card from the stockpile to try to complete a 3-card scene. He discards one by passing it to the player on his left.

First player to correctly make a scene wins the game!

Players can refer to the Matching Guide cards to see how each of the 9 scenes should look when correctly matched.